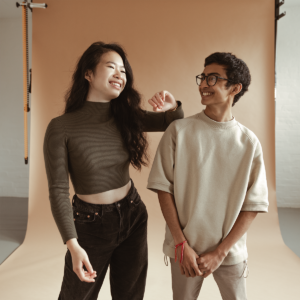 Yellow Pocket is a film and picture production company based in Sheffield, specialising in weddings and commercials. The company is run by students Darshan Gajjar (BA Film and Media Production) and Ai Narapol (BA Digital Media Production).

Their style of work is heavily influenced by the things they enjoy such as: dance, music, documentaries, film and fashion. Personality and movement are important to them as it drives their stories.

Ai has called England her home since the age of 7 years old, and photography has been her passion for almost as long. Her role within the company focusses on photography shoots for fashion, weddings and commercials.

Darshan admits he is a bit of a computer geek but also identifies himself as a creative individual. He began by combining his two passions to shoot his own short films and After Effects animations on his first-generation iPod. Today, Darshan films documentaries, weddings and commercials.

After meeting via Hallam Freelancers, they both discovered that they shared the same creative passion and so decided to form Yellow Pocket in the summer of 2019. Since then, Yellow Pocket has gone from strength to strength shooting film content for many weddings and commercial activities.

Darshan and Ai believe that their diverse backgrounds, creativity and business flair will help them make their mark in this very competitive industry.